Courtship, Dating, or Something Else?

One of my guiltless pleasures is listening to The Reformed Pubcast and the silly but sometimes thoughtful hosts Les and Tanner on reformed theology, craft beer, and popular nerd culture.  A caller on one of their episodes a month or so ago asked about their thoughts on courtship and dating.  Les admitted to not having a philosophy about it, since his children are still fairly young.  I had recommended a book when this topic first surfaced on their Facebook page months ago, but now I see this is a good opportunity for a Postcard topic and perhaps a future Pubcast Facebook post.

One challenge with this topic is terms. Definitions and use vary widely regardless of how terms are defined in Webster’s, and particularly in Christian evangelical circles. I’ve seen “courtship” range from prearranged marriage, to parental guidance to older children as they seek to find their life mate while they are still in the home, to trusted adults providing accountability to the prospective couple.  I’ve seen “dating” range from “Christian” dating for adults that have left their childhood home, to older children that are still at home, described as a redeemed version of “Non-Christian” dating, something today that endorses violation of Scripture.

I have a personal disdain for the term “dating”, largely because of its history and what it’s become in popular American society and western society in general.  Dating is a relatively recent invention.  Chapter 2 of Dr Don Raunikar’s “Choosing God’s Best – Wisdom for Lifelong Romance” recounts the evolution of dating, which I’ve summarized here:

In today’s culture, dating usually describes a male/ female, one-on-one relationship that goes beyond a close friendship. In other words, dating is often a code word that means a couple is intimate both physically and emotionally. That hasn’t always been the case. “Dating” didn’t become a familiar part of the middle-class vocabulary until the mid-1910s. In 1914, Ladies’ Home Journal used the term several times but safely enclosed it in quotation marks with no explanation of its meaning.

Until the early 1900s, almost everything in America revolved around the home and family. Courtship then involved a “calling” system, which varied by region and social status. When a girl reached the proper age to receive male visitors, her mother or guardian invited young men to call.

From 1910 to 1945, as the nation became urban and industrial, people came crowding into the cities. “Calling” was not viewed as practical for young people whose families were forced to live in the cramped spaces of only one or two rooms. For the poor and the working class, parlors and a piano for entertaining were unavailable. Many young people fled the squalor and confinement of their urban homes for amusement elsewhere. A “good time” increasingly became identified with public places and commercial amusements rather than music and conversation in the girl’s parlor. Young women whose wages would not even cover the necessities of life became dependent on men’s “treats.” Keeping company in the family parlor was replaced by dining, dancing, and movies. Courtship went public, left the chaperones behind, and became “dating.”  From the mid-1920s until World War II, dating evolved into a system that sociologists described as “rating and dating.” To rate, you had to date. To date, you had to rate. It wasn’t about love, marriage, or families. It was about competition and popularity, where popularity was earned by how talents, looks, personality or importance in organizations translated into dates.

After World War II up until 1965, women outnumbered men in the United States for the first time in history. Statistically, there weren’t enough men, popular or otherwise, to go around. The dating system that had valued popularity above all was unsettled by women’s concerns about the new scarcity of men.  By 1950, “going steady” completely supplanted the rating/ dating system among American youth. It meant a guaranteed date and greater sexual intimacy.  Misguided sociologists told parents to help their children become datable by putting the children in situations that would allow them to begin dating. After all, they stressed , dating was preparation for the important business of selecting a mate. The strategy was that, ideally, each boy and girl should date and know twenty-five to fifty eligible marriage partners before making a final decision.  The dating system promoted sexual experimentation not only through the privacy it offered but also through the sense of obligation it fostered: The man paid for everything and the woman became indebted. The more money the man spent, the more physical involvement he felt he was owed.

Before the “Make Love, Not War” philosophies of the Vietnam War era, society expected individuals not to be sexually involved before marriage. Today, as most singles will attest, sexual involvement is an unwritten expectation on the first date. By age nineteen, 86 percent of unmarried males are having sexual intercourse. (1)

So what happened?  Don Raunikar quotes George Barna who explains the breakdown in sexual morality that occurred in the 1960s was the consequence of a more serious breakdown in thinking about truth:

The biblical view of truth posits that the ultimate authority in all matters of life, including family, is a matter of absolutes, not a matter of choices. Truth is not one of several alternatives one might or might not embrace according to one’s personal preference. For many years this thinking about truth was reflected in the moral standards considered generally acceptable throughout the country and in legislation proposed and enacted. But over time, a pluralistic view took over. It posited that the ultimate authority was self, mediated by society and its laws. Whereas religious beliefs may inform some of the family-based decisions people make, neither the Bible nor any other religious-based teaching is considered inerrant. (2)

The Bible is clear that the physical intimacy that singles desire and want to experience is reserved for a man and a woman in covenant marriage before God.  For specific references and additional content refer to the Marriage and Sexuality section of the RCF Statement of Faith http://www.reformationchristianfellowship.net/about-us/what-we-believe/.  So how does a couple either progress toward that end-state without sinning, or not get too emotionally or physically involved before knowing marriage is not in their future?

I think single Christians are looking for boundaries, and that’s a good thing.  Some want to know where it is so they can steer well clear of it, while others want to get as close as possible without crossing the line.  Regardless of the heart motivation, the fact that out of thousands of Christianity topics submitted to Mars Hill Church in Seattle, this one became the basis of a sermon message “Religion Saves and Nine Other Misconceptions – Dating”:  “How does a Christian date righteously; and what are the physical, emotional, and mentally connecting boundaries a Christian must set while developing an intimate relationship prior to marriage?”

Together Song of Solomon 2:7 and a framework presented by Raunikar are helpful in understanding these boundaries.

“I adjure you o daughters of Jerusalem, by the gazelles or the does of the field, that you not stir up or awaken love, until it pleases.”

Simply put, don’t do the emotional or physical things that will lead to more emotional and physical intimacy that is before its time, in marriage.  Well, is that holding hands?  Or light kissing?  If it “awakens love” or is “before it’s time”, it might be.  That’s where Raunikar’s framework is helpful, providing some structure for a couple to establish a spiritual intimacy before emotional intimacy before physical intimacy, and when and how much one-on-one alone time comes into play.  I’ve included it here (they’re hard to read here, but click on each picture and you’ll see it in a separate windows that you can enlarge): 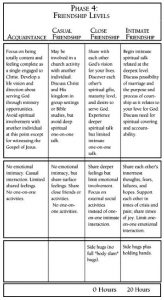 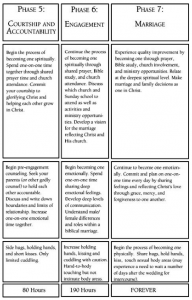 But, beware!  This framework is meant to be a guide, not law, and couples should regulate it based on Song of Solomon 2:7.

So, back to the original question: courtship or dating?  I suggest something new, without the baggage.  Perhaps we could call it “searching”, and “going on a search”, since that’s what singles are doing when not called to singleness, to find God’s life mate for them.  Here’s to “searching”… for God’s glory!

This entry was posted in Christian Living, History. Bookmark the permalink.